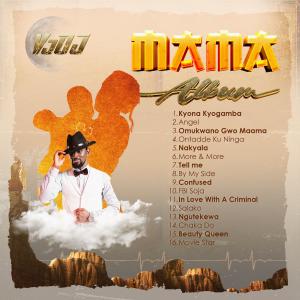 After featuring the legendary Awilo Longomba in Sekemba, VjOj drops another banging album

The album is a fusion of contemporary bands and instruments that give it a slightly diverse touch from the typical Afrobeat feel.

The highlight of the album so far is a song devoted to the mothers dubbed 'Omukwano Gwo Maama' the song has attracted a lot of attention from fans around the world who are attached to the message delivered in the lyrics where VjOjOfficial sings in the chorus "What I miss most is your unconditional Love mama, Your love mama, without you mama this world is nothing and impossible" The chorus is so powerful and impacts almost everyone who listens to the song, and proves how essential mothers are in this world as VjOj calls his mother Super Hero.

No wonder the song is already taking over TikTok a few days after its release there are already hundreds of videos of people showing off their love for their mothers.

Listening to the songs on the album, Vjoj sweetly expresses and sells out the beauty of Uganda's music and the rest of Africa’s to the world.

Vjojoffical is a UK-signed Afrobeat Artist, Producer, film Director CEO and founder of FirstchoiceFilmz a UK limited company, born and raised in Uganda. For so many years, VjOj has made music with many music stars across the whole world including the legendary Awilo Longomba in a song titled Sekemba which has more than 8 million views on youtube.

The talented singer Vjoj has also featured Daddy Andre Uganda's King of dancehall on his biggest song ‘Am cool’ and it’s a beautiful one.

Am cool is arguably one of the biggest songs for VjOj, and Daddy Andre decided to jump on this masterpiece. The song will surely be loved by whoever listens to it across the continent.