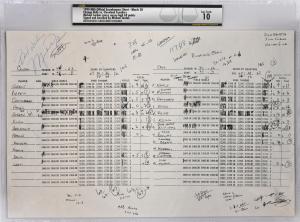 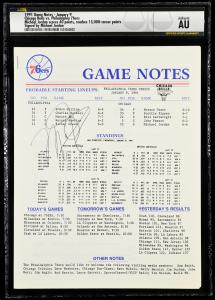 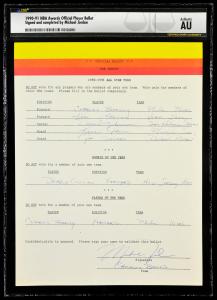 Off the radar for three decades, documents from the 1990-1991 NBA seasons signed by Michael Jordan are authenticated by experts at Certified Sports Guaranty

“One of the unique items is the center court scorer’s sheet with handwritten notations made during Jordan’s career-best 69-point game on March 28, 1990 when the Chicago Bulls defeated the Cleveland Cavaliers 117-113 in overtime,” said Max Spiegel, President of Sarasota, Florida-based Certified Collectibles Group (www.CollectiblesGroup.com), the parent company of Certified Sports Guaranty (www.CSGcards.com) whose sports memorabilia experts certified the authenticity of the items. “Jordan scored so many points that the official scorer had to keep track of the individual points by writing in the margins on the stat sheet!”

The four documents are the NBA Official Scorers Sheet from Jordan’s highest-scoring game in 1990 and a copy of the post-game Official Scorer’s Report that was posted in the locker room after that game, and both documents are signed “Best wishes, Michael Jordan;” a Philadelphia 76ers Game Notes sheet prepared for the team’s January 9, 1991, game against Chicago and initialed “MJ” before he scored 40 points in that game to become the second-fastest player in league history after Wilt Chamberlain to reach 15,000 points; and the NBA Awards Official Player Ballot Jordan filled in by hand and signed when he submitted his votes for the 1990-1991 All Star team.

Players were not allowed to vote for themselves or their teammates, so Jordan wrote in the names of forwards Charles Barkley and Karl Malone, guards Kevin Johnson and Joe Dumars, and center David Robinson. On his ballot, Jordan named forward Derrick Coleman as his pick for Rookie of the Year and selected Charles Barkley as Player of the Year.

“Until now, no one in the sports memorabilia hobby except apparently two people knew these historic artifacts from three decades ago still existed. They were acquired at the arenas at the time of Jordan’s achievements and have been hidden away until a long-time sports collector recently acquired them from the original owner who quietly kept them for 32 years,” explained Spiegel.

“The collector who now owns these important documents considers them to be the Holy Grails of achievements in Jordan’s career, the greatest of all time. Each of Jordan’s signatures or initials on the documents is a perfect 10 on the 1 to 10 grading scale,” he added.

The authenticity of the documents was independently certified by impartial Certified Sports Guaranty experts who verified the provenance through detailed ownership records and were able to trace the provenance directly to the games and moments related to the items. In addition, the signatures and inscriptions are consistent with known genuine examples of Jordan’s signature and signed initials.

What’s the value of the now revealed Michael Jordan-signed documents?

“Due to the unique nature of these items, it’s difficult to add a monetary value, but unique sports memorabilia are popular and continue to grow in popularity,” said Spiegel. “A Wilt Chamberlain’s scorer’s sheet sold for $214,579 in 2022. Sports fans and collectors are always looking for one-of-a-kind items, and if these Jordan documents were offered at auction, they would garner plenty of attention.”