GIVAT CHEN, Israel, Jan. 25, 2023 /PRNewswire/ -- The first Cowpea plant made suitable for mechanized harvesting is being developed by BetterSeeds, an Agri-Tech company that genetically enhances agricultural crops by using its proprietary genome editing technology. BetterSeeds is set to plant their enhanced Cowpea seeds in the United States in the Spring of 2023, in order to test its potential for mass scale cultivation. 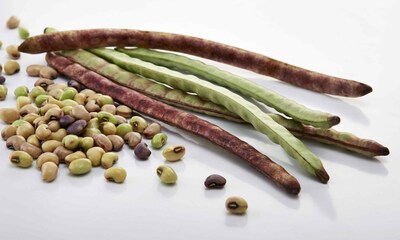 Cowpea, also called Lubia or black-eyed peas, is the most ancient crop known to have been farmed by man. Due to its high protein content, heat tolerance and highly efficient water and fertilizer consumption, Cowpea is an exceedingly sustainable legume with enormous nutritional and agronomic value. Soybean, the most abundantly grown legume, requires large quantities of water and fertilizers and grows well only in a temperate climate, and as such its yield is forecasted to decline by 30% in the upcoming decade due to global warming.

Thus, Cowpea, as a sustainable food and plant-based protein source, is a leading legume candidate to fill the gap in Soybean yield due to the climate changes.

Before BetterSeeds successful gene editing achievement, Cowpea's plant architecture and fruit appearance were not fit for mechanized harvesting and therefore could not be grown at scale. The Cowpea, an indeterminant plant that sprawls on the ground with gradual appearance of pods, could only be harvested by hand and is grown in developing regions where labor is less expensive. BetterSeeds redesigned Cowpea by targeting the gene which alters the plant's architecture into a determinant and erect plant with simultaneous pod appearance, thus fitting Cowpea for mechanized harvesting by a combine – just like Soybean! With this redesigned Cowpea farmers can both increase their versatility of legume cultivation, utilize their land all year round and also ensure the market of sustainable supply of plant-based protein.

BetterSeeds' is further enhancing Cowpea with its upcoming trait of herbicide resistance.

BetterSeeds has shown that better crop genetics is the key to solving the food security challenge of feeding the world's growing population. The company makes use of its unique genome editing technology, EDGETM (Efficient Delivery of gene Editing), that enables the broad application of CRISPR across crops thus making it possible to develop new varieties across a broad portfolio of crops incorporating game changing traits which are not available today due to the limitations of applying genome editing technologies.

Ido Margalit, BetterSeeds CEO: "If I had to choose one crop to focus on, its Cowpea, since we are facing a huge shortfall in the supply of plant-based proteins, namely Soybean, due to climate change. Cowpea has the capability to fill in this gap pending its redesign to make it fit for mass scale cultivation which is exactly what BetterSeeds is doing. Cowpea will help to feed the world!

BetterSeeds is committed to providing better crops which will solve the World's looming food security problems. I believe that we will make an enormous impact."

BetterSeeds, Israel's largest and leading plant genome editing company, is led by seed industry professionals who have amassed significant practical experience in the implementation and improvement of gene editing technology for the design of new crops.

BetterSeeds developed EDGETM (Efficient Delivery of gene Editing) technology which solves the biggest hurdle preventing the wide adoption of CRISPR technology for crop improvement, and YIELDMAXTM - a proprietary trait platform intended to adapt crops to sustain the challenges arising from climate change. The company operates a large facility in Central Israel that consists state-of-the-art molecular biology and tissue culture labs, together with controlled growth chambers and greenhouses, which enable it to efficiently develop and test its genetic platform.