LOS ANGELES, Jan. 23, 2023 /PRNewswire/ -- To honor the memory of the late Arye Gut, for his relentless efforts as a Goodwill Ambassador for both Israel and Azerbaijan, the US-AZ Cultural Foundation (USAZCF) (https://www.us-az-culturalfoundation.com/) and NewsBlaze announce the Arye Gut Inspirational Award. 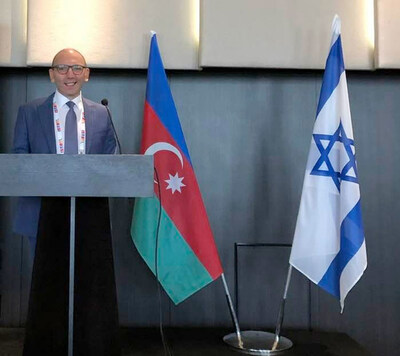 Soon after Azerbaijan declared its independence 1991, Arye became long time instrumental in tightening relations between Azerbaijan and Israel. He was the bridge on which the countries always met.

"The special inspirational Award awardee will be decided upon by the USAZCF Board of Directors, to be presented annually at an especially announced event. It will be continuously bestowed upon individuals or organizations that contribute to strengthening relations between Azerbaijan and Israel," NewsBlaze reported.

Read that story at https://newsblaze.com/world/eurasia/award-named-after-late-arye-gut_189198/

The US-Azerbaijan Cultural Foundation is currently in the process of producing its first documentary project, "Through The Blink Of An Eye," telling a unique story of people helping people – a nation helping a nation. It is a Humanitarian Spirit story, an attestation to the deeply amiable relations between Azerbaijan and Israel.

The first Arye Gut Award will be presented to a selected individual or an organization during the premier screening of the documentary "Through The Blink Of An Eye," planned to take place in Baku, Azerbaijan, in 2023.

In December 2022, with the support and the logistical assistance on the ground in Azerbaijan by The State Committee for Diaspora Affairs of the Republic of Azerbaijan and Zaur Hasanov, USAZCF representative in Azerbaijan, wounded Azerbaijani soldier Arif Hajiyev flew to Israel for a 4-day visit, accompanied by US-AZ Cultural Foundation President, Nurit Greenger, and Double Trouble Production CEO, Eti El-Kiss.

Arif's memorable and emotional 4-day visit to Israel was filmed and the footage will be used to produce a documentary named "Through The Blink Of An Eye."

In July 2022, NewsBlaze journalist-reporter Nurit Greenger visited Arye Gut at his home in the city of Netanya, Israel.

Nurit reported: "At the time of my visit with Arye I was busy in the initial process of my plan to accompany veteran Arif Hajiyev to Israel, which included securing the needed funds to pay for the project. Arye was very ill but he told me: 'If I get better and my financial resources will not have to go to pay a home caregiving person, I will fund your vision.'"

Sadly, Arye's goodwill intention statement to Nurit Greenger did not come to fruition, and he passed away soon after. Even more saddening is the fact that after two decades of work devoted to expanding Azerbaijan-Israel relations, Arye was not able to hear the great news that came out on November 26, 2022. The Republic of Azerbaijan declared it would establish its embassy in Tel Aviv, Israel, and tapped Deputy Education Minister Mukhtar Mammadov to be Azerbaijan's first Ambassador to Israel.

Arye was an expert on international relations who spent over twenty years building strong relations between Azerbaijan and Israel. He was known in Azerbaijan as Israel Goodwill Ambassador.

Born in Baku in 1975 and after finishing international relations studies at Baku State University, Arye moved to Israel in 2000, from where he led the representative office of the Baku International Multiculturalism Centre and for years worked diligently to bring Azerbaijan and Israel relations to one crescendo after another.

US-AZ Cultural Foundation acts as a contributor to increasing relations between Azerbaijan and the United States, in particular, as well Israel and the West, in general, via culture, dialogue, media, entertainment, film and documentary content. https://www.us-az-culturalfoundation.com/

NewsBlaze was founded in 2004 as an independent online newspaper and information portal, forming relationships with other publishers and wire services. NewsBlaze covers broad topics of interest to readers worldwide, which has helped build a loyal, global following of readers, especially in Australia, North America and Europe.